But there was spelling error on some of the stamps – reminding all designer to double check spelling if Irish is not your first language.

The Irish word for moon is “gealach”. But the stamp accidentally spelled it “gaelach”, which means being Gaelic

An Post has said that it has made arrangements to ensure that such errors will not happen again.

The €1 stamps designed by Detail Design Studio are valid for postage within the island of Ireland and available in selected post offices, online at irishstamps.ie or by phone at (353 1) 705 7400. This special stamp issue also includes a First Day Cover envelope (€4) and colourful Miniature Stamp Sheet (€5) which can also be bought online at irishstamps.ie or at the GPO, Dublin. 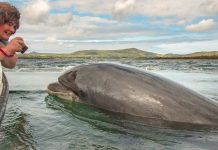 Fermanagh admin - November 14, 2021
0
This week there has been vast array of media outlets reporting that Sean Quinn or principles representing him, have applied the 'Right...

Irish Culture admin - November 14, 2021
0
According to the Irish Examiner - The number of Irish businesses selling online is significantly above the EU average as Ireland’s digital...

Education admin - November 14, 2021
0
According to BBCNI and the Belfast Telegraph, Northern Ireland Schools and teachers have been targeted by fake TikTok accounts that apparently see’s...